The Library is now open Monday-Friday from 9 - 5. We will be closed July 3rd in observance of 4th of July. Get your virtual library card here to access our great digital resources. Please see new SAFETY GUIDELINES. Legendary Summer Reading Program: Every registrant wins a prize! Sign up HERE

Posted at 14:20h in DVD Recommendations, News by Isabella Rowan 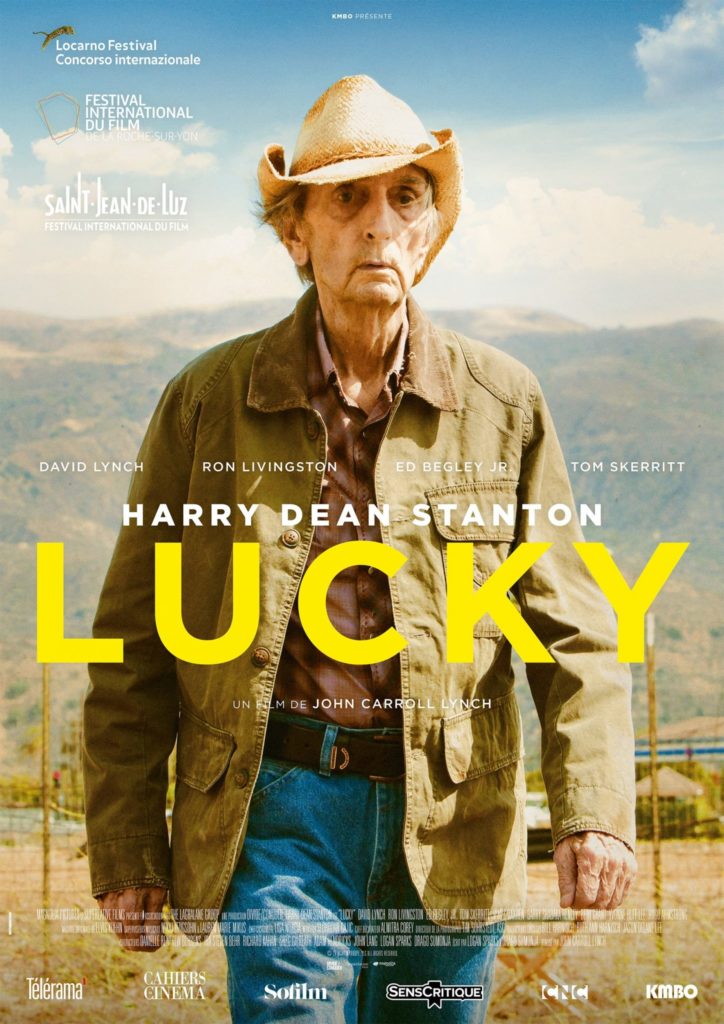 Harry Dean Stanton, who passed away last year only a couple of weeks before the opening of Lucky, had “America” writ large on his lean face, all bone-hollows and shadow. His was the kind of face that looked perfectly natural doing anything Americans do: drinking at the bar, barbecuing hamburgers, or riding a horse. He also looked completely at home robbing a rural bank (Dillinger – 1973) or preaching hellfire and brimstone from a desolate street corner (Wise Blood – 1979).  His long, iconic face and flat voice, country and patient, placed Stanton squarely in the “character actor “ rank for the first thirty years of his career.

So entrenched was he in character work, both on television and in film, that his first romantic lead role (Paris Texas – 1984) came at last when he was fifty-eight years old. Cast as his bride, Nastassja Kinski, was twenty-four.  The fact that Kinski, then one of the most beautiful young women in the world, could completely sell a longing ache for this aged and haggard wolf tells all one need know regarding the immense potency of Stanton’s laconic presence. Among other awards, the film won at Cannes that year. Producers and directors took quick notice. Stanton started getting larger parts immediately.

Fans have their favorite performances:  Saint Paul played as a cunning huckster selling Christ’s love to the rubes (Last Temptation of Christ -1988); or the doomed, gentle private-eye, Johnny Farragut, a child-like man in a very adult, perverse world (Wild at Heart – 1990). In these and all the actor’s performances, the lone, desert coyote of “Harry Dean Stanton” is present. Thinking of the actor, the very concept of “technique” seems puffy overkill. There is absolutely no actor’s submersion into a role, ala Daniel Day-Lewis. Nope. There’s just Harry.  Stanton put it plainly, quoted a few years before his death: “I play myself as totally as I possibly can. My own Harry Dean Stanton act. It’s me. Still searching for liberation, or enlightenment, and realizing that it might happen, it might not.”

And it is the open, raw, “might not” part that makes Stanton magic on film . . . and so enthralling.

In Lucky, Stanton plays a craggy, cranky ninety-eight year old Navy veteran living in a small, western town who, following a collapse in his apartment, realizes that he is near the curtain call of his last act. So, the viewer is treated to Lucky’s/Stanton’s final “search for liberation or enlightenment” in the most clear and direct terms. Lucky walks very upright but stiff-legged through the streets of the town, visiting bars and cafés – speaking to friends, hearing their stories – drawing what he needs from them, gathering peace and meaning like a bedroll tucked under his arm for this last leg of the journey.

Finest moment: Lucky visits a pet store, imagining a pet might provide comfort and company during his swan song. He considers a dog, then a cat – even a bird; admitting finally he never really liked pets all that much (especially birds). “What’s this?” he asks, peering into a screen-covered aquarium of crickets squirming over paper-pressed egg cartons. The clerk explains that customers buy them for live pet food.

Cut, next scene: Lucky lying in his bed in the dark, still night, looking up at the ceiling. He’s listening to the chorus of cricket-song flooding the cooling air. Set close, near the sill of an open window, we see the egg cartons and the crickets, his purchase, crawling tentatively about, finding the open window and leaping outward into the limitless, starry darkness.

In Lucky, there has never been a part in which Stanton is more clearly, simply, Harry Dean Stanton. This film, in fact, is an homage to the actor – and the actor’s  final, brave, very upright but stiff-legged walk toward liberation.

dvd of the month