City Mandate: Anyone entering the public library must wear a mask.
The Library is open Monday-Wednesday from 9am-8pm and Thursday-Saturday 9am-5pm.
Get your virtual library card here to access our great digital resources. 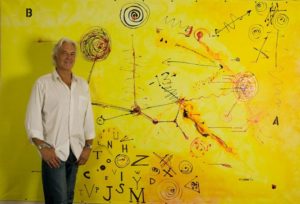 Award-winning artist, Ron Burkhardt, will present a lecture about the inspiration and techniques behind his work. Participants are invited to tour the gallery on their own anytime beginning at 6 pm prior to the start of the lecture at 7 pm.

About the Presenter: Ron Burkhardt is the originator of 8 genres of contemporary America art-Notism, (hieroglyphic memory fragments), Earth Art (large organic fields of paint fused with the elements of nature) and LetterScapes (bold geometric color blocks that form abstract words).

Honored with over 200 creative awards, and more than 70 exhibitions in galleries and museums worldwide, Ron brings a unique array of high-voltage work to Delray's high-energy world. Known for his rhythmic scrawls, striking designs, and rich colorations, the tri-coastal Burkhardt has been exhibited and/or collected internationally in a dozen countries including Italy, Japan, Germany, Brazil, and Switzerland.